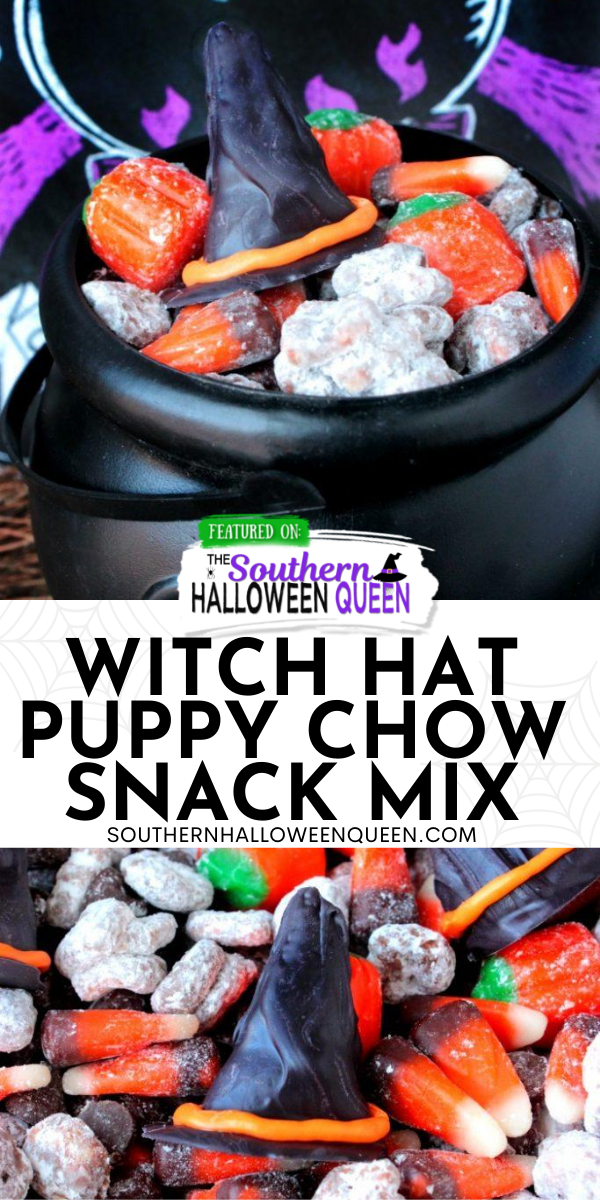 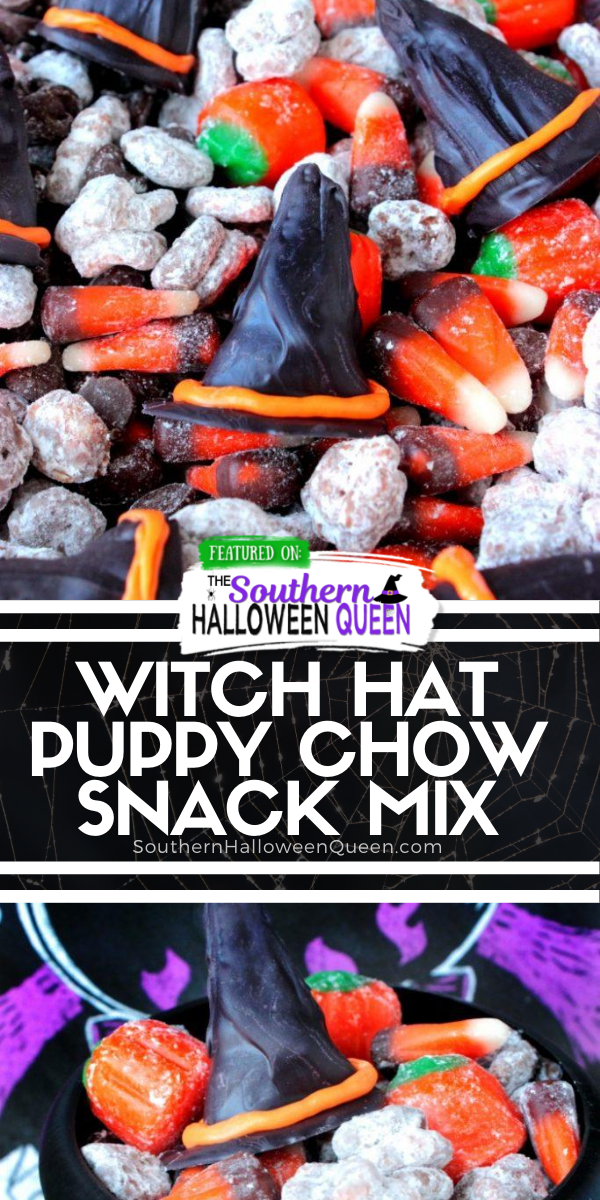 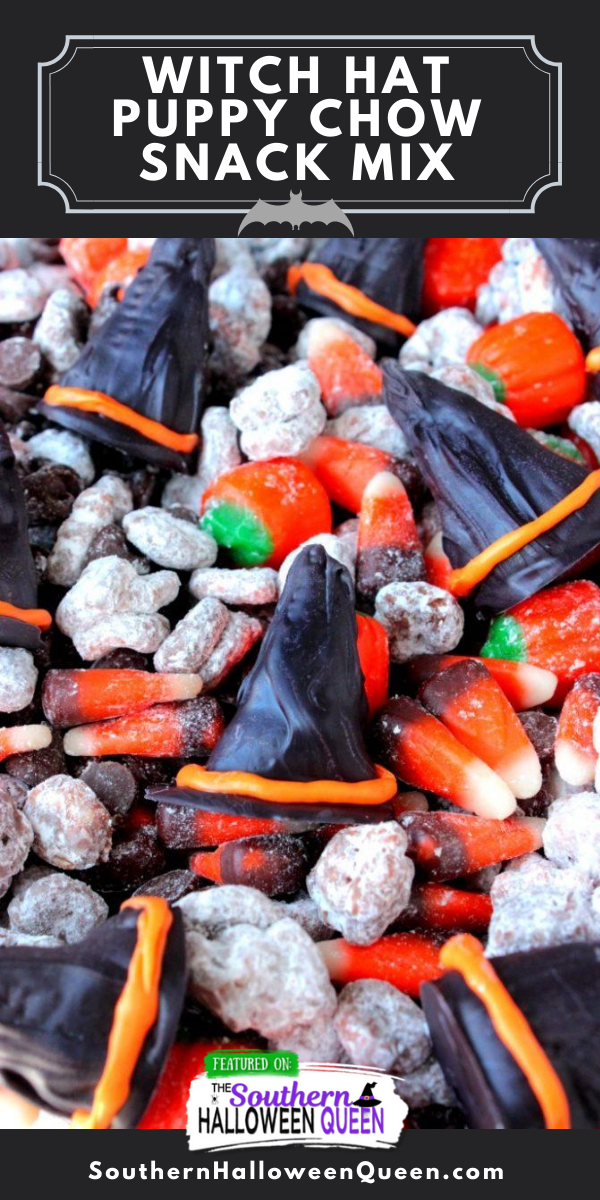 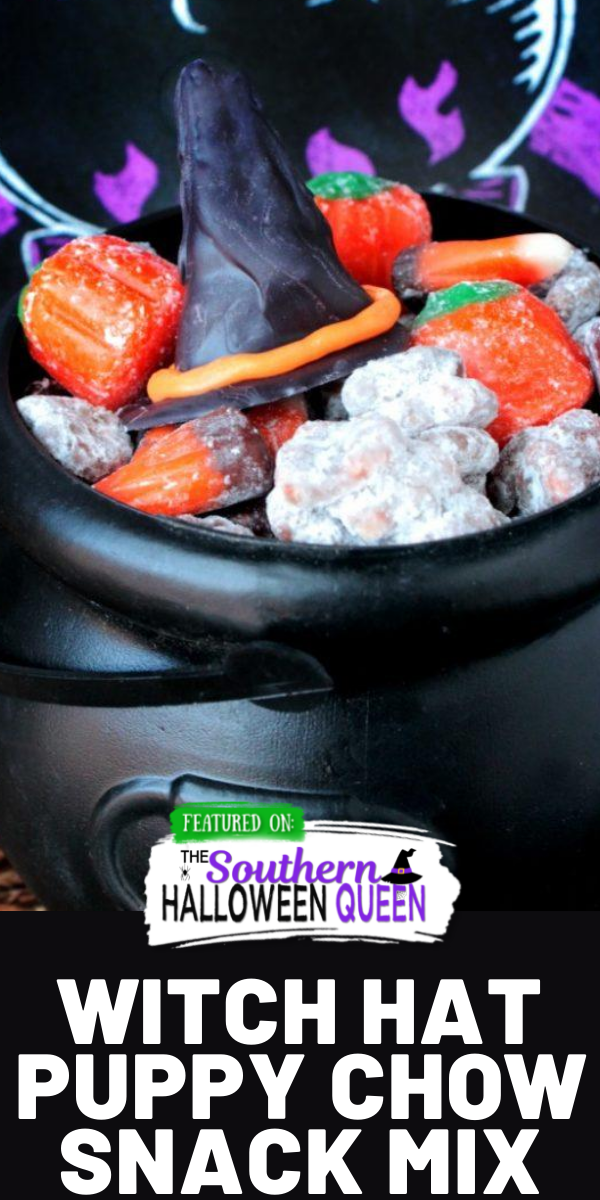 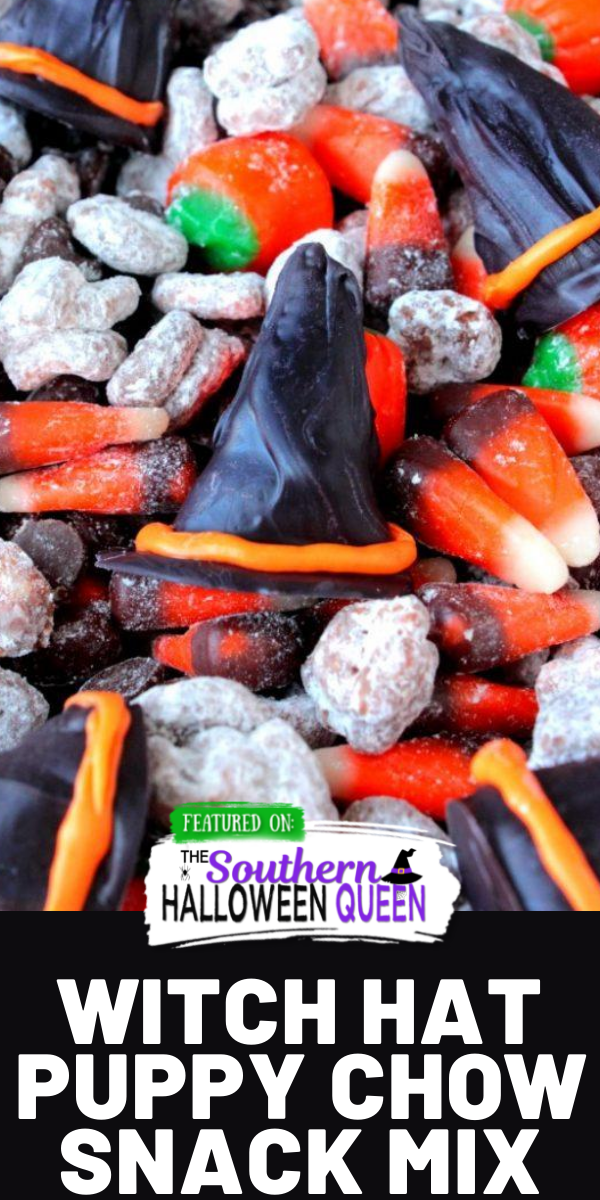 Share this spooky snack with the Halloween witches in your life! This Witch Hat Puppy Chow Snack is packed with Halloween cereal, candy and chocolate witch hats!

This recipe was created for Dixie Crystals by BigBear’sWife, post and words written are 100% mine as always. 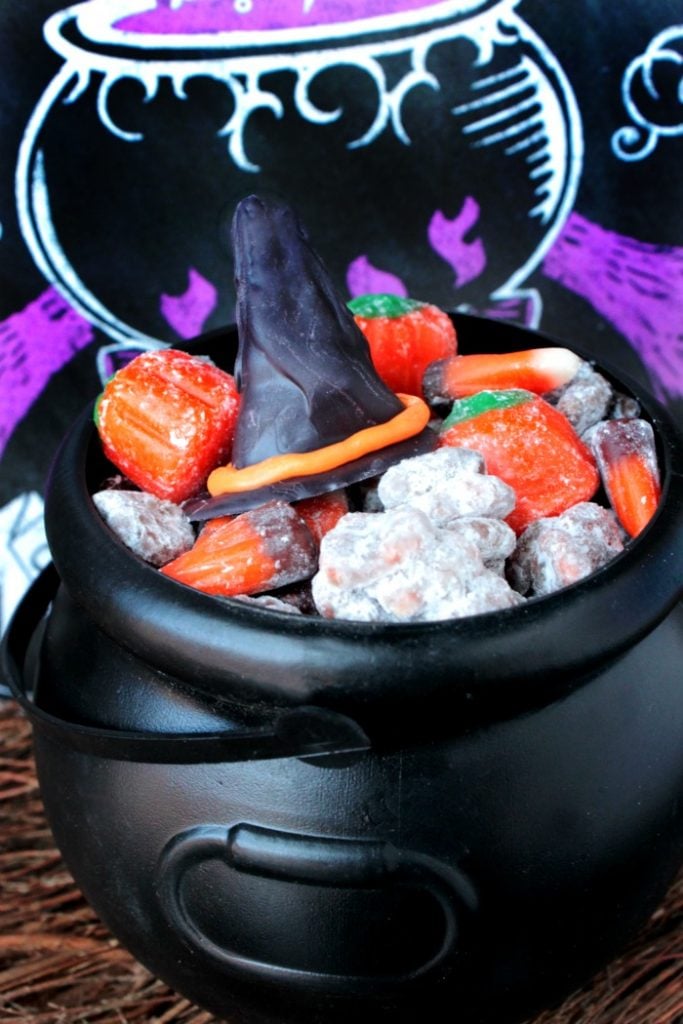 Well, I mean I did kind of start early because my due date was in October and I wanted to make sure I have most of October blog stuff done before he got here but I still would have started planning for Halloween early even if we didn’t have a baby on the way when I started planning. 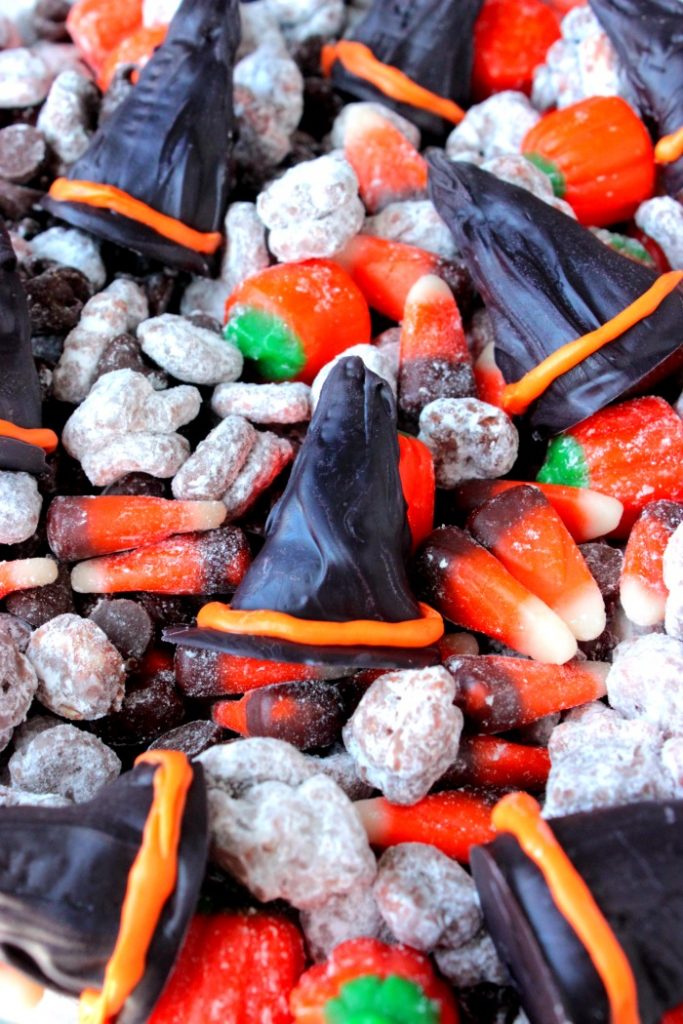 While I love all of the Halloween treats that I make, I might be in love with this Witch Hat Puppy Chow Snack Mix just a little bit more than some of the others.  I probably love this even more since it’s Witch themed haha!

I’ve got some other witch themed desserts on the blog and I’ve got another Halloween party mix on the blog, so this is kind of a mix match-up of those!

So I made this party mix puppy chow just like I make all my favorite puppy chow recipes.

It’s got cereal, melted chocolate, peanut butter, butter and powdered sugar mixed together for the main base of the part mix. 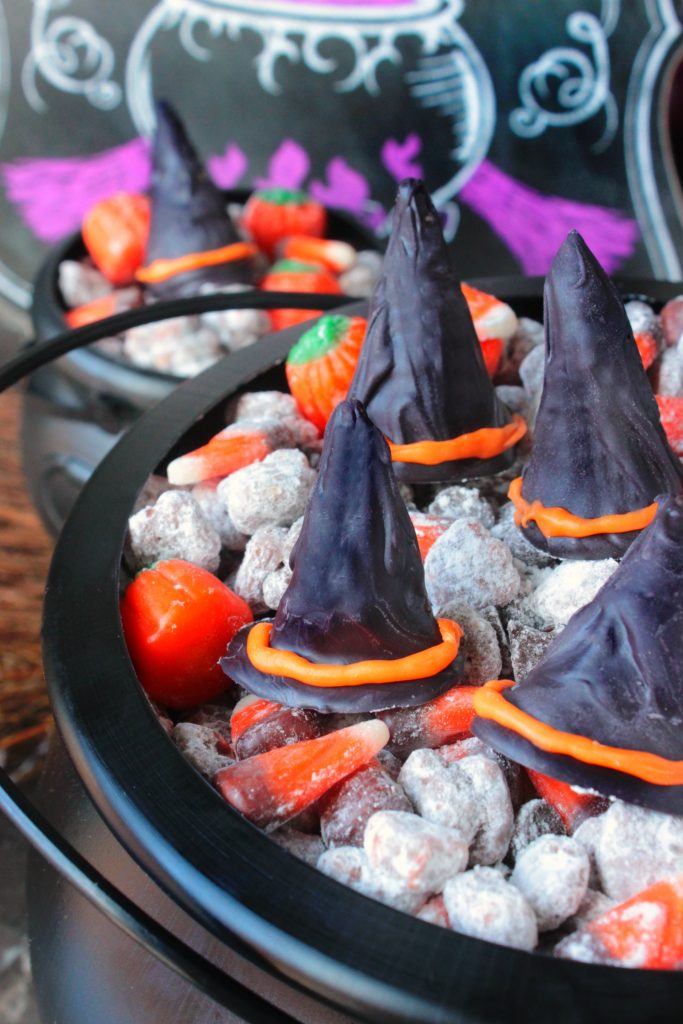 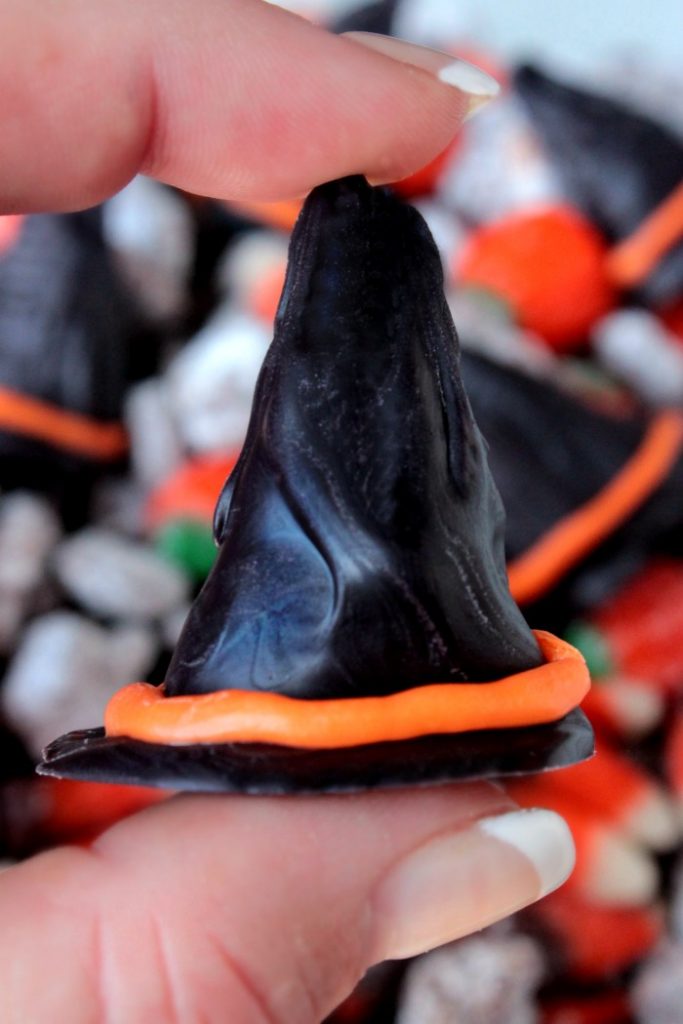 Then I added the Witch Hats!! 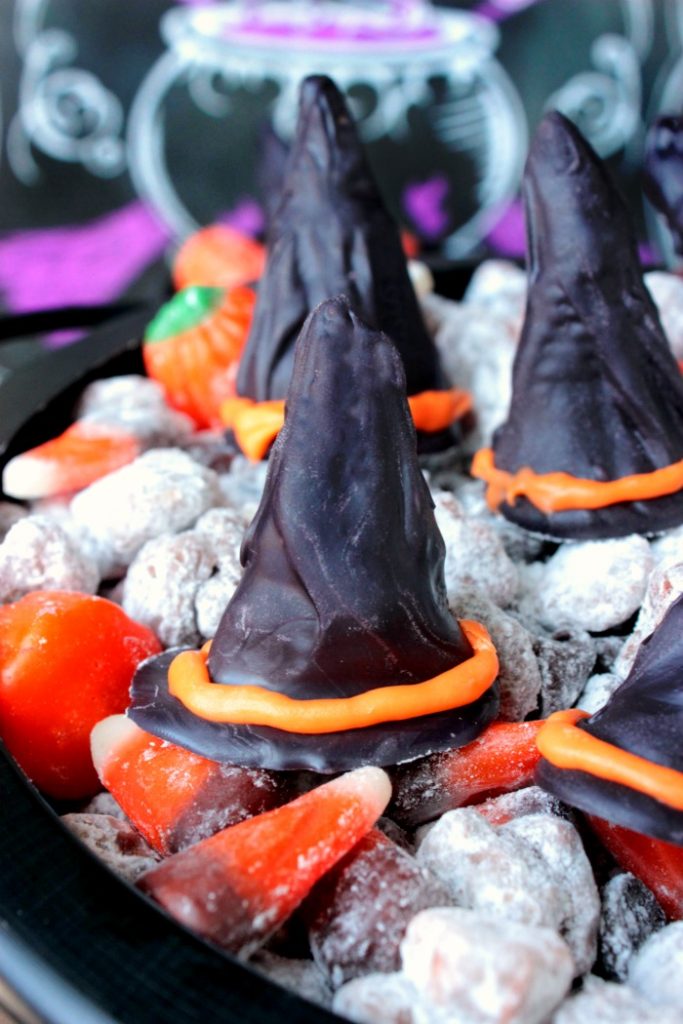 Little witch hats are the final and most adorable ingredient to this Witch Hat Puppy Chow Snack!

These little witch hats were inspired by the cute Santa Hats that I made a few years ago for my cookie swap party from a recipe I saw on Shelly’s blog, Cookies and Cups! 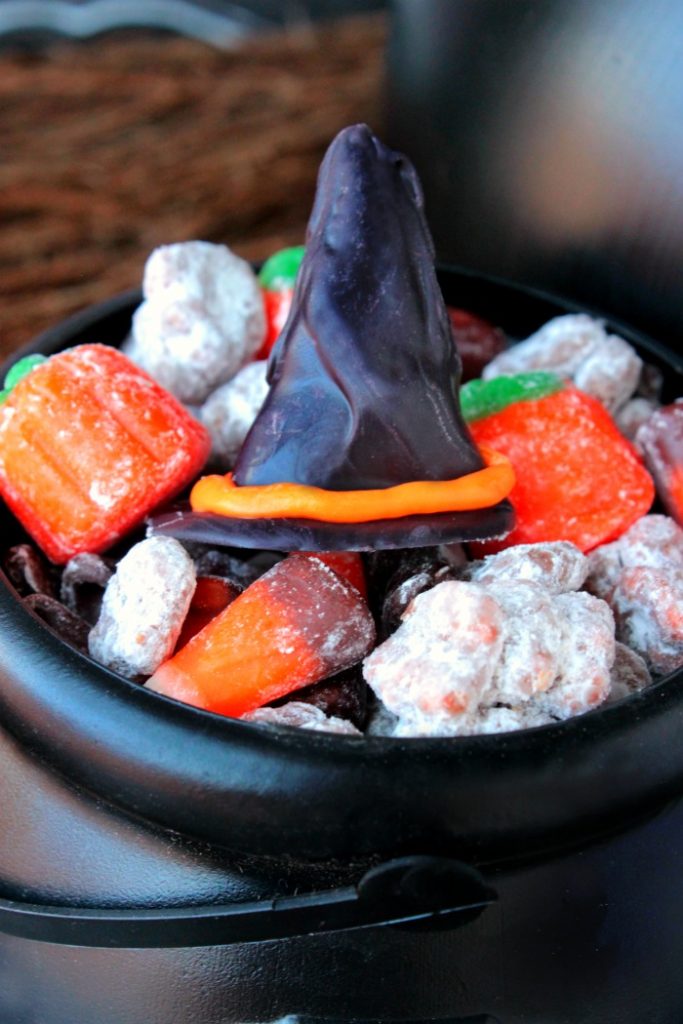 I MADE THIS RECIPE FOR DIXIE CRYSTALS AND THEY’VE GOT THE ENTIRE RECIPE POSTED ON THEIR SITE. 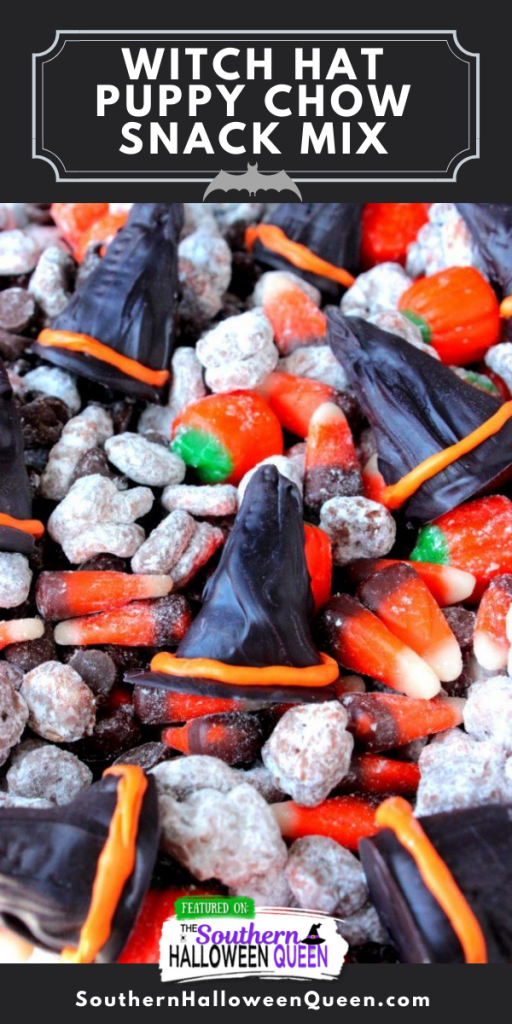 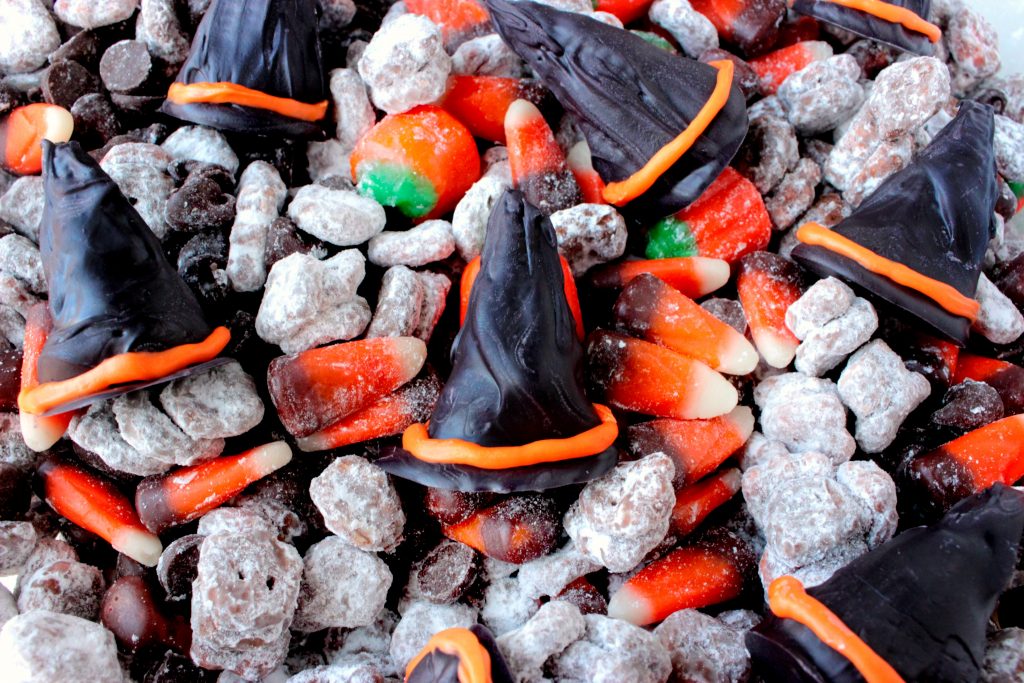 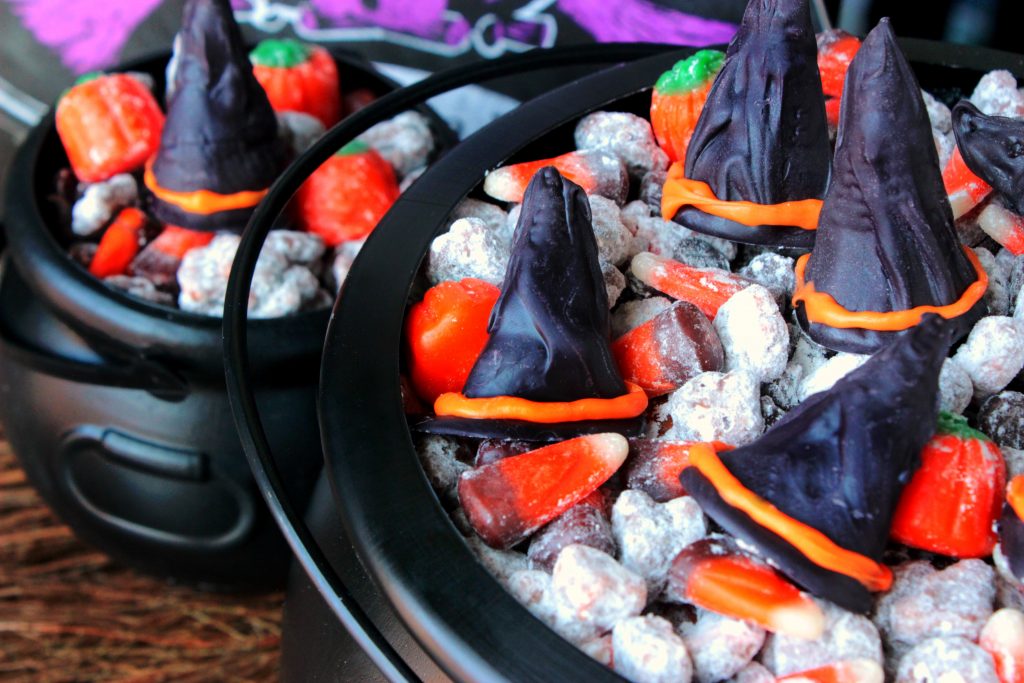 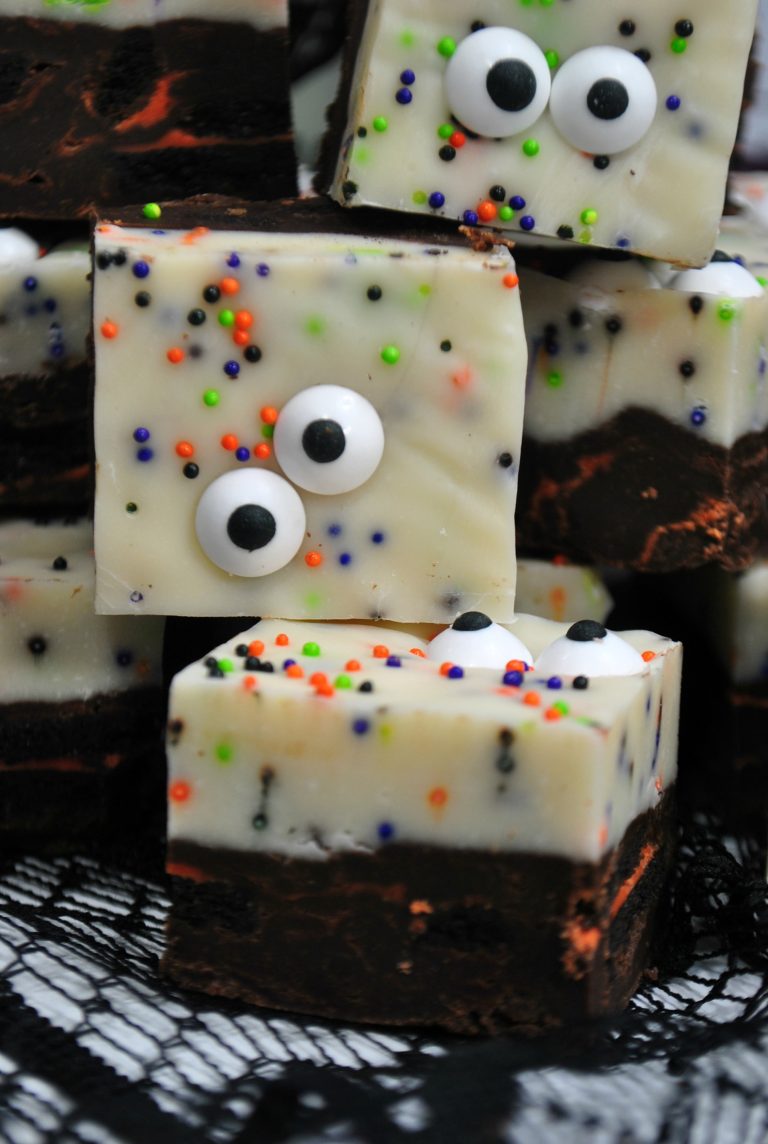 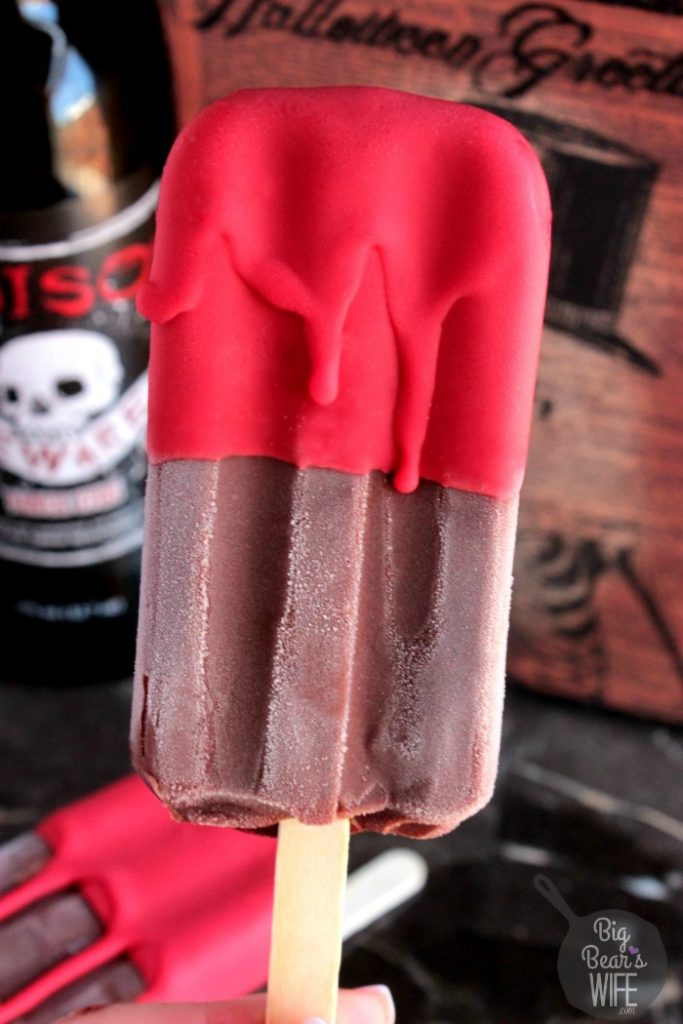 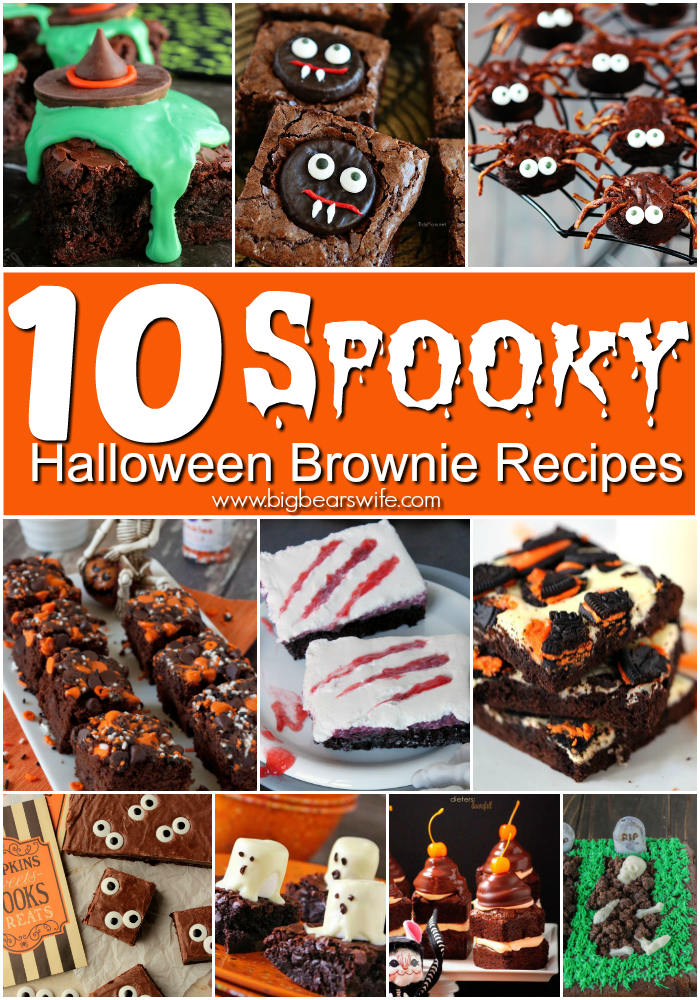 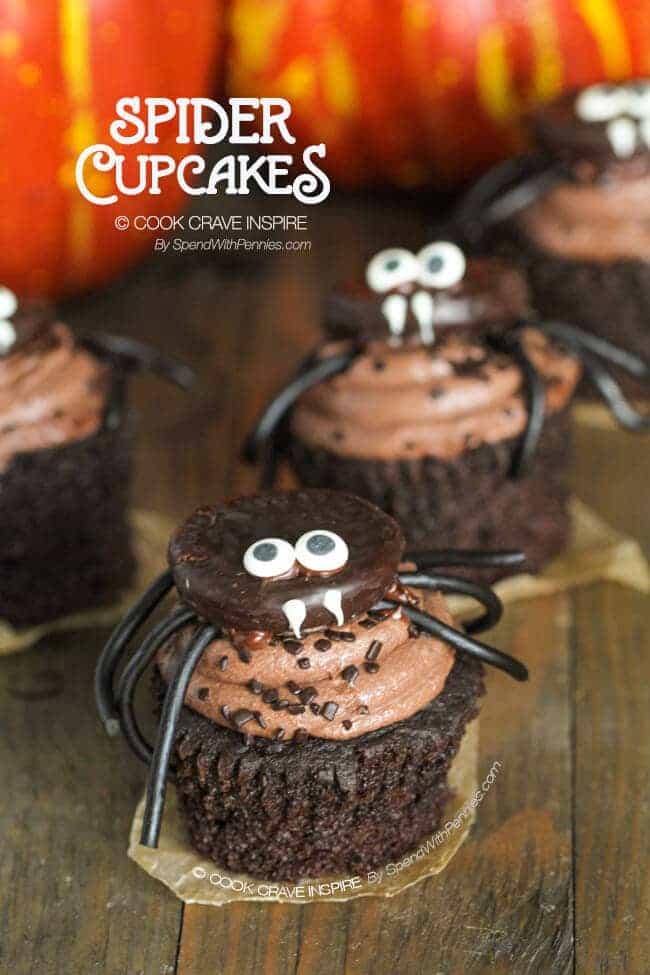